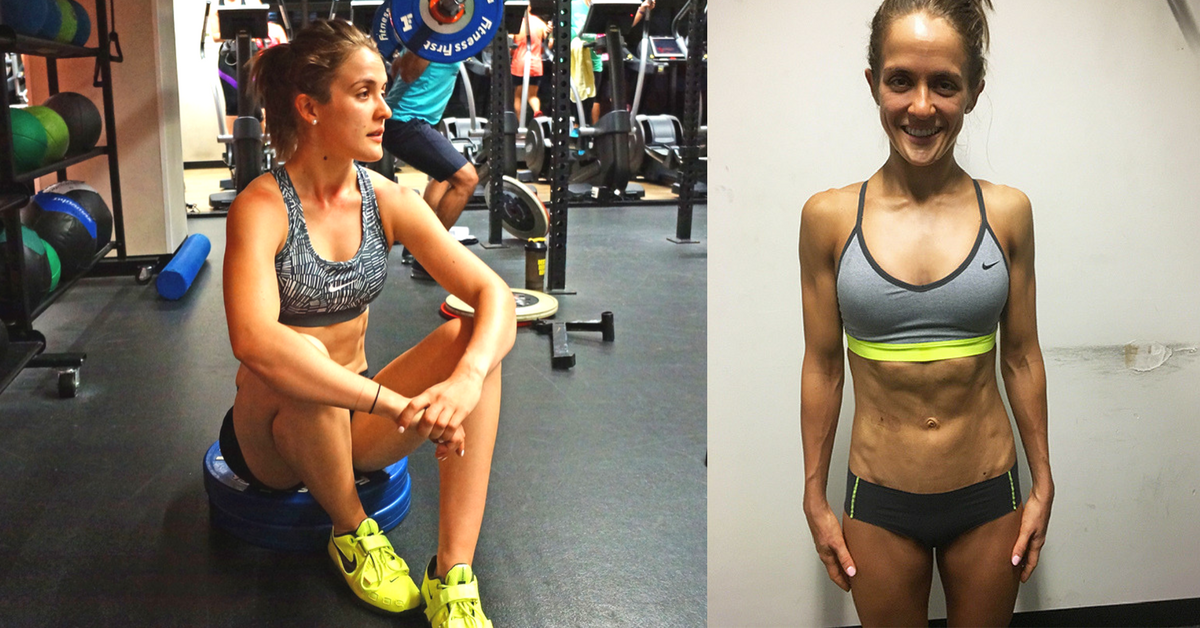 Note: Emily isn’t a competitive fitness or sports model. She is a professional who enjoys training week in and week out and simply wanted to challenge herself. Tick a goal off the box which she certainly did.

Starting Point – Foundations were already set (This made everything easier)

Emily had already been training with me for about 1.5 years. So instead of having to teach form or go through training phases of structural balance where we would of had to work on strengthening her imbalances and improving her fitness levels we could get straight into training pretty hard towards her competition.

Nutrition she already had a healthy mindset towards. She was eating protein at every meal, whole food sources of fats, carbs and vegetables and occasionally she would indulge once or twice a week if she went out with friends. Food isn’t something she is attached to and binging on junk food for hours or days isn’t an occurrence or problem for her. This is something she had already worked on whilst training with me and which has kept her performing well at training whilst also staying lean.

The only difference between what she was doing previously to what she was doing now to get into competition ready shape was to then start being more strategic with her training and nutrition. Measuring the quantities of her food, getting her training sessions in, practicing her posing and really planning and scheduling her week and days in advance so she could be able to do what was required.

Emily decided early on in the year to compete and we had planned around 12 weeks to get her ready. She’s in relatively good shape all year round so 12 weeks isn’t that big of a deal. Initially it would of only been the last 4-6 weeks where she would of had to work really hard to get the results she wanted.

Unfortunately 12 weeks out was when she was involved in a car accident which set her back 3-4 weeks. For the first 2 weeks she was contemplating not doing the competition all together because of the shock from the car accident and whiplash. As the weeks went by she started feeling better and decided it’s better to do it now. So 8-10 weeks would be enough.

The strategy going into it knowing we only had 8-10 weeks to get into really good shape was simple. Complete focus and getting it done. Emily could have waited and pushed the date back to the next competition in June; which she thought about but she didn’t. She wanted to get it over and done with, tick the box and then move on with her life. She believed she could do it and I had totally belief that she could do it too. She had recovered well from her car accident and she wasn’t experiencing any pain during her initial training sessions after her car accident.

The majority of Emily’s training involved both descending or low reps aiming to get stronger or maintain her strength. Along with hypertrophy and high volume weight training to build muscle where she needed it. Towards the latter stages of her comp prep she would still do strength training at the start of her workout and more glycogen depleting workouts (high volume) towards the middle and end of her workouts.

Example of one of Emily’s Leg Day Workouts:

Purpose for low reps or descending rep scheme: When dropping body fat you want to keep as much muscle as you can. This is what gives your body definition or “tone”. Low levels of body fat along with low levels of lean muscles equals to looking stringy and bony. You want to have shape and figure. To give your muscles a reason to stay it needs to think that it’s going to be doing regular  strength work, otherwise it will have no reason to stay there.

Purpose for higher volume training: In the heavy light method above it provided Emily with enough training stimulus to train hard and get stronger (5-7 reps) whilst also providing Emily with enough volume (15-17 reps) to deplete her glycogen stores. To lose body fat your body will preferably opt for glycogen as it’s main source of energy before it turns to burning fat. Less glycogen equals a better chance that your body will utilise fat as it’s main source of energy.

Cardio: As Emily is possibly only going to compete once in her life we wanted to leave no stone unturned. We wanted her to be in her best shape and condition ever. For the last 3 weeks Emily did cardio 3-5 times per week. Cardio was a slow incline walk for 45-60 minutes and we would taper up her frequency week by week. We could of got away with a lot less than what she did but like I said, we wanted to leave no stone unturned. The judges mentioned her conditioning was noticeable from the start and in the sports model division they even said she was TOO lean.

Contrary to popular belief Emily didn’t have to go on a low carb or no carb diet during her competition preparation. Her nutrition was totally specific to her based off her BioSignature. Emily is naturally an ectomorph, her sub-ecap (back) regularly reads below 10 and her supra-iliac and umbilical are also regularly around 10. She is naturally a carb type and we included carbs in the form of rice and potatoes everyday leading up to her competition.

We did experiment previously with a few days of low carbs along with 2-3 days of higher carbs but Emily always looked leaner, performed better and was generally in a better mood and had better results when she had carbs everyday.

Re-feeds: One or two days each week after her measurement she would have a re-feed. One or two days where she would have extra calories and more carbs to bump up her metabolism and keep her body happy. This would also provide her with the energy needed to get through a training week. As her measurements would come down her re-feeds would go slightly up. On occasions she would wake up weighing less and being leaner after a re-feed day. On this day it might be more carbs with every meal along with 1/2 box to a whole box of gluten free cereal in the evening with almond milk. This is also why it’s important to be measuring and tracking, if you’re ahead of schedule there is no need to take it further. The goal is to get the best result whilst eating as much food as you can and doing less. That’s the healthiest way to go about it.

Emily’s legs were the leanest they’ve ever been. Hamstrings and quads all came down significantly through mainly strength training, weight training and quality nutrition. No excess training legs everyday to get them leaner. At most she only trained them only twice per week, the last 3 weeks she only trained them once per week. As her priority was building up her upper body.

There are a few reasons why her legs got so lean:

Thinking about competing or getting into super dooper shape? You don’t have to do it all yourself. It’s much more efficient and easier working with someone that’s done it before. Book in a consultation today.

Experience an individualised way of training to achieve your fitness goal. Meet our head trainer Gordon to discuss your goals and be guided through an individualised PT session in our studio.
BOOK IN MY INTRODUCTORY SESSION

BOOK IN YOUR INTRODUCTORY SESSION

Experience a more efficient and individualised way of training to achieve your fitness goal. Meet Gordon, discuss your goals and be taken through an individualised PT session in our studio.

This privacy policy sets out Dr. Nicole Beukens uses and protects any information that you give us when you use this website.
Dr. Nicole Beurkens is committed to ensuring that your privacy is protected. Should we ask you to provide certain information by which you can be identified when using this website, then you can be assured that it will only be used in accordance with this privacy statement.
Dr. Nicole Beurkens may change this policy from time to time by updating this page. You should check this page from time to time to ensure that you are happy with any changes.

WHAT INFORMATION WE COLLECT AND WHY

We only ever collect the information that we need in order to serve you.
Generally, this just means collecting your first name and email address that you enter, for example, when you request a resource, register for a webinar, or submit a message via a contact form.
if you are a paying customer, we also collect your billing information including your last name and your postal address.